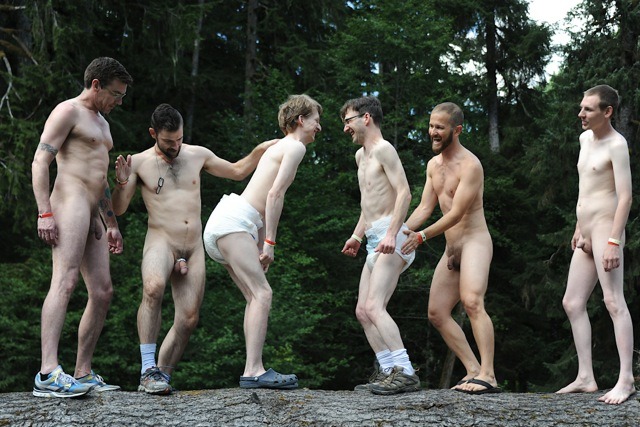 Spankings. As we walked through camp naked to various locations of course other gay campers were curious. I invited anyone who wanted to join to come with. One camp of friends seemed to revolve around diaper fetish and 4 guys joined us briefly.

It was interesting to watch the cultural clash. Some guys were easy and adaptable, others literally couldn’t stand in the same space. I asked two of the guys how they’d like to be photographed, and they asked for spanking and humiliation. I could do the spanking part. Interesting to manage a fluid group. Sexuality is diverse.

I’ve met enough people to know that I don’t know a lot, even though I know a lot. It’s important not to immediately pathologize someone, even though that might be an initial inclination with the less-known. Adults having fun in a consensual non-harmful way, living out our fantasies (in thoughtful safe spaces), why would we be against that? A tiny bit of Googling revealed that this interest is also referred to as ABDLs: adult babies and diaper lovers. If it brings happiness, why am I going to oppose it?

This site uses Akismet to reduce spam. Learn how your comment data is processed.